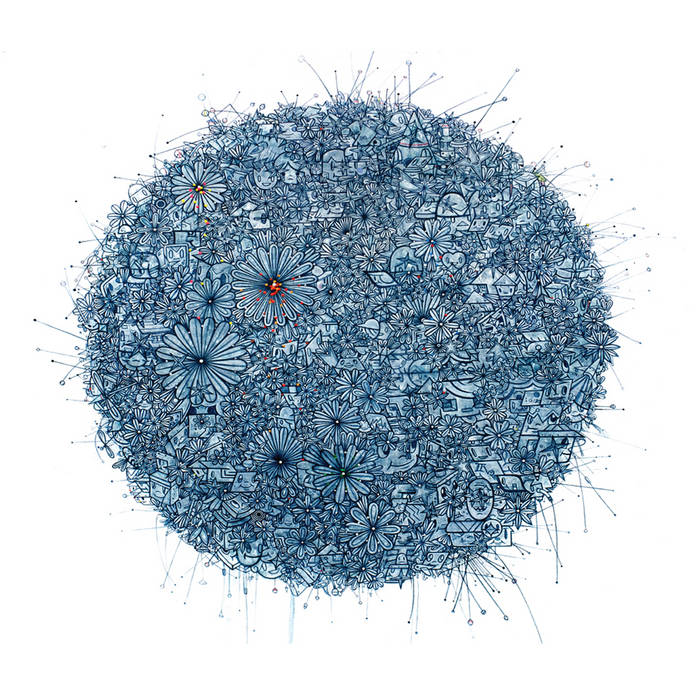 “The Sanguine Cadaver” is a new expedition through the percussion-centric world of drummer John Colpitts, better known as Kid Millions. Known for his driving force as the drummer of experimental rock outfit Oneida, as well as his personal conceptual percussion project Man Forever, Kid Millions is also a key player in a long list of amazing collaborations with artists such as William Basinski, Laurie Anderson, the Boredoms, Akron Family, Jim Sauter (of Borbetomagus), and many more. Throughout both sides of “The Sanguine Cadaver,” Colpitts expresses his complete devotion to the act of percussion, embodying and luxuriating in the physical and spiritual connection between human and drum kit. The first piece, “Begging Attire,” creates a cavernous sound world with the assistance of additional musicians on guitar, keyboard, and added percussion. A dense, dynamic wall of droning resonance is constructed, powerfully covering all corners of the frequency spectrum. Each musician’s respective sound flows in and out of focus, creating subtle shifts that alter the mood of the piece. Every instrument plays a specific role, never overpowering one another but instead working in a ritual unison, lending to the billowing, impenetrable qualities of the resulting sonic environment. Although rooted in static minimalism, “Begging Attire” is a far cry from peaceful ambiance. Instead, it sprawls forth in a menacing, ominous storm of deep tones and percussive metallic textures, eventually locking into a howling, almost Industrial ceremony of buzzing, churning squalls and slow, plodding rhythms. On the second piece, “For Jerry,” we find Kid Millions in a personal, exploratory space. This is the sound of one man and his drums, a complete physical immersion in rhythm through a catharsis of primal energy. Colpitts blazes forward relentlessly, never resting on one pattern or tempo but instead seemingly playing multiple ones simultaneously. “For Jerry” is, however, more than just an impressive display of chops. It is a document of a human reaching elevated levels of consciousness through intense, sustained interaction with his instrument. Wordless vocal chanting and tonal incantations make their way through the maelstrom, suggesting altered states of spiritual transcendence. The extended technique of the piece is not only a feat of strength and a challenge to the performer, but the listener as well. When Kid Millions plays, it’s clear that he puts his entire being into it, a quality that translates magnificently throughout all moments of this cassette.